HomeMobileAndroid7 Android App Development Trends for 2020: Are You Ready?

If only 100 people lived on this planet, 86 of them would be using Android and 13 of them iOS.

With the increasing demand for mobile applications and games, mobile app development companies are doing their best to come up with new innovations. If we talk about the Android operating system, the number of apps available on Google Play Store has crossed 2.8 million. 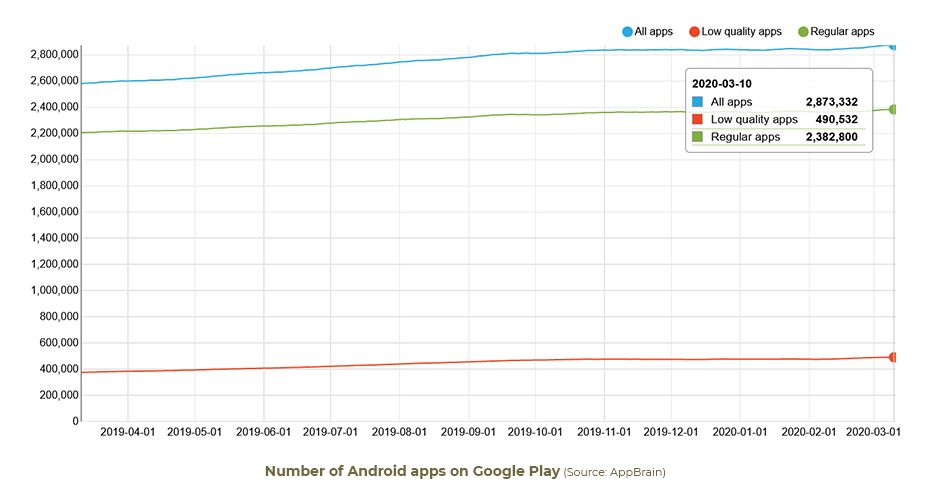 Moreover, an average of 6,140 mobile apps were released through the Play Store every single day!

To cut the story short, we can say that there are no speed breakers on the road when it comes to developing Android apps.

As the future of Android platform looks quite promising, it is important for us to know the latest Android app development trends that will dominate the market in 2020.

Top 7 Android app development trends for 2020 and beyond:

The best thing about Jetpack is that it encompasses the androidx.* package libraries, unbundled from the platform APIs, which means that it offers backward compatibility.

Within a very short span of time, 80% of the top 1,000 apps in the Play store have adopted Jetpack.

Kotlin has gained a higher status since Google announced it as an official programming language for developing Android apps, alongside Java.
Kotlin brings all the advantages of a modern language (such as compact runtime library, incremental compilation, and high performance) to the Android platform. Moreover, it has been successfully adopted by major companies like Uber, Trello, Evernote, Pinterest, and Coursera for their Android apps.

The upcoming version of Kotlin, Kotlin 1.4, is likely to arrive in spring 2020. Android app developers can expect to get a better development experience with the new version.

2019 witnessed the release of foldable devices like the Samsung Galaxy Fold, the Huawei Mate X, and the new Motorola Razr.
With this, the providers of mobile operating systems are busy working on innovative ideas to offer a mobile development platform to build apps that seamlessly adjust their display based on the folding and unfolding of the screen.

For instance, Google worked with Samsung to provide a seamless foldable experience on Galaxy Fold.

What if you can access an app without downloading or installing it?
Android instant apps are based on the concept of enabling users to try out an app or game before installing it their devices.

In simple words, an instant app is a demo version of an app that is operated and run from the cloud, so you don’t need to download it.

The state of Android gaming is sturdy as we stare down a new decade.
6 of the top 10 Android smartphone apps in terms of programmatic video advertising fall in the category of games. Furthermore, 5 of the top 10 display apps are games.

The continuous evolution of disruptive technologies such as Cloud computing, Blockchain, Augmented Reality (AR) and Virtual Reality (VR) have provided Android gaming users with an improved gaming experience with offerings such as realistic visuals and real-time data.

In 2020, Android gaming will get more sophisticated and graphically impressive, thereby setting a new standard for playing on small (but ever-growing) smartphone screens.

Moreover, users will be able to play games before they are fully downloaded. According to XDA-Developers, Google is currently working on an Incremental File System (for a future version of Android) which will let users play big Android games even when they are in the middle of being downloaded.

Taking into account the amount of personal data that is stored in the Android devices, there is a need to implement effective security mechanisms.
In 2020, the Android app development industry is expected to witness a shift towards the security-first approach. Developers will focus on implementing a stronger encryption of data and launching security updates at regular intervals to preserve privacy in mobile apps.

Due to the near universal presence of smartphones, it comes as no surprise that the adoption of mobile wallets is increasing worldwide and is driving growth in non-cash transactions.
According to a recent survey, it is estimated that the transaction value of mobile payment apps will reach nearly $14 trillion by 2022.

By observing all these Android app development trends, it seems that the Android industry is going to soar new highs in the coming year. There will be newer innovations, newer challenges and a lot to wait for. Understanding these trends and analyzing them, with the assistance of an experienced Android development company, would surely help, prior to taking a big plunge into implementation.

Are you excited to take the maximum benefits of these trends and increase your turnover with many folds? Comment below.

Coronavirus Outbreak:
How to Switch to Remote Work the Right Way