There has been much floating in the air since the rumors of Apple introducing iOS 10 in the year 2016 and a couple of more rumors followed by it. Here, we have forecasted what you can expect from the technology the coming year and what is just in the air. 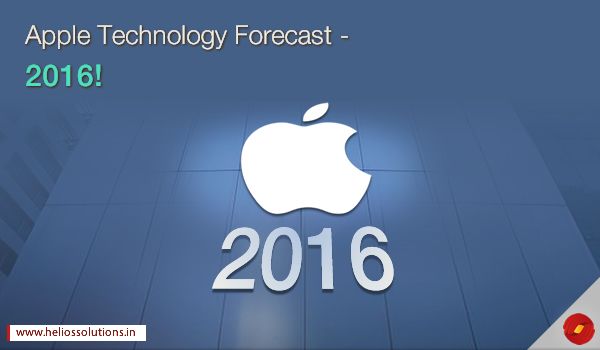 With more than 80,000 employees worldwide, Apple is one of the most valuable brands in the world that is not just a luxury for people but they have learnt to design their lives around using that technology. In these times of advanced technology and timeless innovations, we are heading towards a time where will be able to do things just with a thought!

Watch it – If there is an APPLE WATCH

Although this version could be more ‘Sporty’ like! Like their earlier collaboration with Nike, this time also Apple is expected to team up with a sports brand to avail its technology lovers with something extra-ordinary. It is being that that there will be a stand-alone device like Samsung Gear S2 which can be directly connected to the cellular network. Other omissions in the Apple Watch could be addressed in the first upgrade which can be GPS, additional health sensors and high capacity battery.

So be ready to be blown out of your minds!

The news has it that iPhone 7 will be introduced in the coming year. It has not been much time since the launch of iPhone 7. Sources say that iPhone 7 will have a bigger screen and will have enhanced features of course. So those who were disappointed with the tall bodies of iPhone 6 or iPhone 6 plus can expect Apple to introduce a body that might be identical to the size of iPhone 5 or iPhone5S. if you are a business and wish to make an application in the coming year, we suggest wait until the iPhone 7 is launched and create application with the iPhone specialist for updated version.

It is also being said that iPhone 7 will be build around AMOLED which will be more power friendly then the LCD screen technology that Apple has been using till now for creating iPhone screens.

Year 2015 has been a great year for Apple Inc. since their launch of Apple Television that has made television viewing experience a very elated one. In 2016, it is anticipated that Apple will be launching a finer and improved version of the Apple TV. But that looks like it may take a back seat, since the product was launched only this year, the sources say that the company may keep it slow and easy. So if not beginning of the year, you can surely expect this by the end of next year!

For Apple technology lovers in the UK, there is some good news. Apple somehow is showering their love for the citizens of United Kingdom. What you get is an appearance of the Apple TV like BBC iPLayer on the platform. Now, that gets interesting! Apple Inc. announced about their plans to extend its existing browser based service to the Apple box which will be connected to the Sky.

So if not beginning of the year, you can surely expect this by the end of next year!

In the year 2016, Macbook lovers can expect a very refined version of Macbook Pro. Apple Inc. is making a great deal to enhance feature that will aid in helping designer to do better work. Macbook Pro is the first choice for designers or those from the media industry. As we know Mac Pro should be getting update soon as it has been more than 2 years since the current design has been carried on. There will not external remodeling but reference with the EI caption code will have new machine in the works which will enable Apple to take benefit from the last two years of processor advances. It’s complete line-up is running on the same core hardware. So you can expect your Macbook to look and feel better to use, gear up to the update and save what you can to buy you new revived Macbook Pro.

The coming year is going to have something for a better processor for Mac lovers! The Mac processor is expected to have an update. We have always seen experiments being done with design of the processor but we won’t be seeing its own chips integrated in the desktop and laptop devices. This can happen only if they are compatible with the current Intel specifications. Even if this is the case, the Mac Processor will run iOS applications with OS X software. Here, the corporation will have to give a notice to the developers in order to update applications to the new architecture. So you can still expect processors that are in line with Intel technology at least for the next 12 months.  To update your applications, talk to the mobile application specialist and get solutions that will make your application extravagant!

And guess what? Apple Music will now be available on Android and will later be expanded. So all the android users will also get Apple Music to enjoy! Now, masses enjoy Apple technology.

Also, news says that Apple Pay will be accepted in a wider range of stores than it is in the current times. Not all stores across the globe Apple Pay, but with the new improvements and extensions, it expected to be more acceptable. So shopping with Apple Pay will be more welcomed. So not iPhone users can easily make purchases with Apple Pay and make them most of it! Ask the iPhone specialist to avail your mobile application with an Apple Pay – Payment gateway.

We hope this blog gave you all that you needed to know about what Apple is going to offer you in the coming year. Hope you have great New Year celebrations.

We are Mobile app expert for development of applications and enable businesses to go online for all platforms and devices. Get responsive websites and applications with us. We also offer many more services for IT solutions, check out the link to see services we offer: https://www.heliossolutions.co, get in touch to post your requirement. Follow us on social media channels to get the latest updates in the IT world. Until then keep it technological!

3 Questions to Answer Before You Go for a Mobile App