Microsoft with yet another surprise, this time it is for the iOS users.  Now, iOS users get the perks of having ‘Cortana’ as their very smart personal assistant. Microsoft enhances experience for the Apple users. Microsoft confirmed on 26th November, 2015 that Cortana is in the Beta stage and prepared to release very soon for iOS. Microsoft Cortana will now be available for limited beta testers and final version will be available for those who have Windows 10. 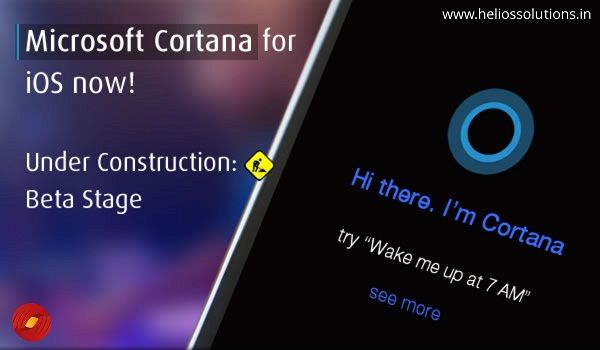 Cortana is a digital assistant which is now specifically designed for iPhone users by Microsoft. This feature will be powered for those who also have a computer with Windows 10. Now, all iPhones can be enabled with Cortana.

Hell yeah! iPhone users will get cortana voice commands to perform tasks such as organizing the agenda, manage alarms or any kind of event creation. She can also wake you up in the morning and remind you of your important dates.

Also worthy of mentioning is Cortana, the virtual voice assistant that Microsoft released with the desktop OS Windows 10. Most fun fact about this digital assistant is that users love to ask it “Cortana, tell me a joke,” which has resulted in more than half a million jokes in under a month. – as stated by Microsoft(Nasdaq “MSFT @microsoft).

You should have Cortana very soon in your iPhone. Microsoft is using an Apple authorized method for distribution of the public beta testers which is called TestFlight system. According to the report by PC World, Microsoft Cortana ‘Beta Program’ for iOS will be available to users in the United States and China. Moreover, the method in use will allow application developers to distribute the beta version to limited number of 2000 people and will run for not more than 2 months.  Apple enables you with many interesting functions already and with Cortana in picture, it only gets better.

It is said that Cortanta for iOS will be more like Windows 10 and will work in the similar fashion but with a few exceptions like stemming from Apple impose restrictions on third party iOS app development. Now, audience will witness extreme competition between Siri and Cortana to see who wins over Apple users. Can’t wait right! We cannot wait either.

Keep tuned in to our blogs for our review on the final version of Cortana for iPhone users. Also, if you are interested in getting regular updates about information and technology, then follow us on LinkedIn, Twitter and Facebook, we will update you with all the happenings in the technology world. This information has a twist and twirl from a techie’s mind who work for an Outsourcing Company in India, so if you are looking to get any development projects done in an affordable price, you can get a quote right away. Stay updated always!

IT professionals are now powered with Microsoft Power Apps