It has not been long that Google launched its official integrated development environment (IDE) named Android Studio in 2013 for developers to make development on their platform easier and faster. All the android developers, some news you are going to love! Google has enlightened you with the new release of Android Studio 2 enabling developers with very interesting features. Android developers are about to feel blessed. It is going to be the fastest way of building high quality Android apps. 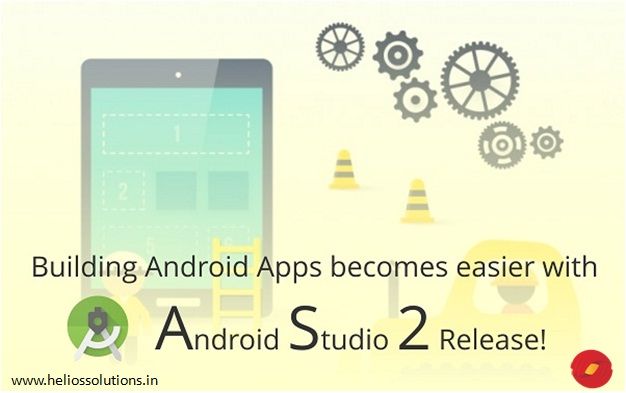 This IDE is an official release by Google enabling developers to build apps for Android platform including Tablets, Phones, Android Auto and Android Wear. It is availing Android Developers with almost everything providing tools like code analysis, code editor, emulators and more. It is also offering support for the Android latest version and Google Play Services.

Any developer wishes to have easy and fast development process where new innovative tools play a very important role. In these competitive times, mobile apps are all about agility and speed. This IDE release – Android Studio 2 is all about the speed offering changes in the release that can speed up development process in all. Now developers can make changes and upload them live to an already running app. As a result of this feature, developers can avoid re-deployment and re-installation of the APK. May be for major changes, the app may need a restart.

The Android Studio 2 brings a new emulator for Android App Developers. The new emulator is expected to run 3X times than Android’s previous emulator as it can now take advantage of multi-core CPUs. It comes with Android Debug Bridge (ADB) enhancements that can push android apps and data 10X times faster to the emulator than to a physical device.

But this will act like physical device, this Android emulator includes built-in Google Play Services which enables better testing of API functionality.

Developers shall be benefited from this emulator as it comes with new features to manage calls, battery, network, GPS and much more. So develop and test without a physical device using Android Emulator.

Adding to the benefits of speed agility, the Android Emulator comes with a new and improved user interface and sensor controls. This enhancement enables developers to drag and drop APKs for quick installation, resize and rescale the window, use multi-touch actions like pinch, zoom, pan, rotate, tilt and many more. This makes development with Android Studio even more interesting!

A direct link to the documentation: http://goo.gl/BBiYB8

All you have to do is write once and your developed app can be run anywhere to test on multiple devices. With increasing popularity of cloud services among businesses, it is becoming important to meet with the development needs for such services. Thus, cloud test lab integration with such features is an amazing introduction for enabling developers with the best in Android development. Ask Mobile Application Specialist or to learn more about testing with Cloud Test Lab Integration: http://goo.gl/ICI8R2

When it comes to mobile applications, the biggest challenge faced by businesses is to be visible on the Google Search or Play Store. With App Indexing API, it is easier for users to find your app at the App store, Google Search or Play Store. Android Studio 2 brings features availing developers in creation of correct URL structure in the application code and also allows addition of code attributes.

There are auto-generated URLS with App Indexing feature in Android Studio. With a few clicks, a developer can add indexable URL links that they can test within the IDE. So you can help your partners, associates, increase their visibility on the Google Search for their users by adding auto – generated URLS with the App Indexing feature in Android Studio. So developers can now conduct testing just with a few steps.

For support on the same, visit: http://goo.gl/q5xE9f

With Android Studio 2 release, Android Developers are going to enjoy development as now they will be able to create OpenGLES based games or mobile apps that can see each frame and the GL state with the new GPU debugger. The new GPU debugger allows uncover and diagnosis GL rendering issues by capturing and analyzing the GPU stream from any Android device. The preview allows view frame by frame allowing developers to identify and debug graphics rendering issues. This makes debugging easy with Android devices. http://goo.gl/DVRoxc  – visit the official link for tech documentation.

The Integrated Development Environment – Android Studio is built on the IntelliJ coding platform which has also been updated since its release, thus making Android Studio 2 even more robust and comfortable for development of Android Apps. If you need a copy of the Android Studio 2, then please visit this link and get your copy today: http://goo.gl/DVRoxc

5 Advantages of having Event Mobile App

App Store Optimization – Why is it Necessary?