HomeCMSDrupalDrupal and Vue.js: Playing Together to Craft Rich Web Experiences 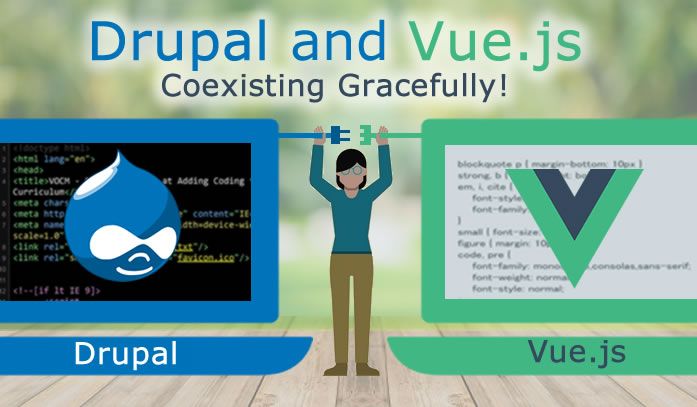 As RESTful Web services module is included in Drupal 8 core, it can essentially function as an API-first back end. Being a Drupal Development Agency, we would love to leverage Drupal 8 in decoupled architecture.

What is decoupled Drupal?

When you employ a different front-end rather than using Drupal’s own built in front-end, it is called decoupled Drupal. Usually a JavaScript framework or native application framework is deployed for the front end. This JS framework uses popular HTTP methods such as GET, POST, PATCH and DELETE to coordinate with Drupal via RESTful API.

The figure below depicts the differences between traditional and decoupled architectural pattern. The decoupled pattern leverages client-side frameworks like Vue.js (that we will discuss later in this post) in order to fulfill the demand of multi-channel publishing or creating more interactive web applications.

When should you use decoupled Drupal?

When should you not decouple Drupal?

You do not need the overhead of a decoupled architecture to power a standalone site or application.

If you use decoupled Drupal, it can lead to workarounds that duplicate, interrupt or otherwise obfuscate the integrity of end-to-end Drupal.

In progressive decoupling, rather than using the JavaScript framework (Vue.js, in this case) on its own (as in fully decoupled Drupal) we would interpolate Vue.js into Drupal’s front end. Thus, allowing REST API to serve as a means of communication between Vue.js (within Drupal’s front end) with Drupal itself.

What are the rewards of progressively decoupled Drupal?

Before we answer this question, you would need to ask these questions!

If you answer any of the questions in “yes” or “may be” then you need to decouple Drupal progressively. To understand it in a clear manner, you would need to know first, what are the risks of fully decoupled Drupal.

Now, let us explain why we are keen on using Vue.js layered on top of Drupal 8 to add the client-side interactivity along with Drupal’s HTML.

Modern web users expect more dynamic and interactive experiences than a decade ago and jQuery in Drupal does not suffice this needs. Moreover, we chose Vue.js over other popular JavaScript frameworks because:

Getting started with Vue.js

You can get started with Vue.js in many ways and one of the simplest ways is to create an index.html file and include Vue with:

Using npm package or the Drupal module are other ways.

The component system in Vue.js is an awesome concept and one of the most powerful features which allows JavaScript developers to build large-scale applications comprising small and self-contained components that are often reusable.

The Vue.js community offers a lot of important components which you can use in your development.

Vue.js has yet more compelling features but they are beyond the scope of this post, do let us know if you are interested to know more about it.

Hope, we were able to convey this message that now you have a spectrum of choices on how you want to use Drupal based on the needs of your organization.

Are you ready for building more interactive web experiences for your users with decoupled Drupal? Please feel free to share your unique needs with us; our team of Drupal experts would reach out to you.

How to Fix Mobile App Usability Issues and Enhance UX of Your App?