Technology wearables have existed since decades now. With wearables, evolution is note worthy. The trends in wearable technology has finally picked up after the advent of mobile applications. Wearables have become the next big thing among IT Professionals and Technology enthusiasts.

The wearable technology is reaching new heights starting from the 60’s to the new trends today where Health and Fitness is one of the trends that is catching among the masses.

From watch calculators to today smart glasses, innovation in the field of wearable technology has come a long way. Reading this blog will be much nostalgic if you have interests in technology and gadgets. Starting from the 60’s to 2016, explore the best of evolving wearable industry. 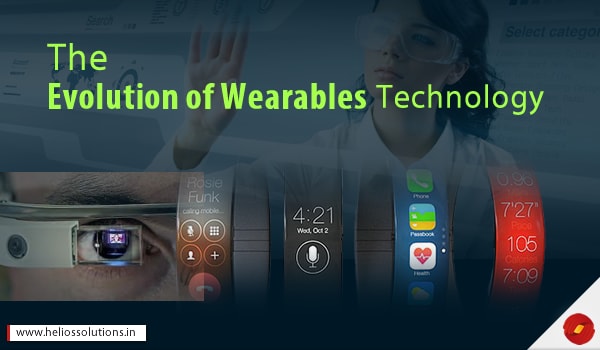 We have seen them in the movies where they would import drugs hid in the shoe – Known as the Cheating Shoe. Among the most recognized wearable – the Timing Device was concealed in a shoe which was a discovery of a mathematician as a cheat at the roulette. The device would predict where the ball would land on a roulette table. The number was sent via radio waves to the gambler’s device in the shoe. It was created by Edward O. Thorpe and Claude Shannon.

It was the first ever affordable portable stereo which was enabled ‘Music While On the Go’! It revolutionized the accessibility of listening to music. The music player was a cassette based player. The Sony President Akio Morita was not very convinced of the name ‘Walkman’ and thus wanted to change it but the subordinates then informed him that it may be too late to change as the marketing had gone a long way and it would be an expensive affair to change the same. By the late 90’s, the Walkman was carried on as the emerging digital technologies leading to many more devices in line.

Well, we may be thinking that Google Smart Glasses are a new innovation, but for the record the similar technology has existed for a while now.  It came back in the 80’s known as the EyeTap Technology – A device worn on the eye. Back then, microchips were gaining popularity, thus there was mass production of micro chips in that decade. Steve Man – The researcher and inventor of the TapEye wearable made the wearer look like a motorcyclist and thus did not get much accreditation among the masses. Although the idea got some eyeballs. The Machine would record the user saw through their right eye while they could also see it at the same time. And yes it is Steve Man’s device which is now known as Google Glass.

It looked like a very awkward piece of device but it was attempt in the 80s to have a computer with the basic functions on the wrist run by a battery. It was one of the best wearable technology that got everyone’s attention. It would tell the time and could perform basic calculations. It was a huge device with the keyboard that could be worn like watch around the wrist. Because of its size, it did not appeal to the masses. It was known as the SIEKO UC 2000 Wrist PC by technology giant SIEKO.

The wearable technology witnessed a revolutionary invention. An innovation in the 90s before the millennial. The device was called the Private Eye which consisted of a head mounted screen and 85 hard drive and a motorbike battery. It is Reflection Technology device came with vibrating mirror created for display of the wearer’s field of vision. It was invented by Doug Platt which was later used by students of Columbia University to build augmented reality repair system for laser printers.

Something similar to the Cheating shoe, the sneaker phone was really sneaky! This innovation was among the weirdest innovations as the shoe had a phone within it. It gained much popularity among with the TV series – Get Smart. In the 90s a company called Sports Illustrated developed and promoted “Sneaker Phone” which had corded phone. The commercials began on television with a special deal of free Sneaker Phone. NBA player Shaquille O’Neal showed offer this shoe phone in an NBA All-Star Game.

The ultimate wearable was brought to the market by Levi’s. This was like a break-through among all the wearable innovations till date. It was basically an integrated device inside the a Jacket consisting of a conductible fabric harness which was connected to the mobile phone and MP3 Player which was then integrated into a jacket with a built-in button. Makes you feel like Gadget Man.

The first ever fitness wearable called Nike+ was brought to the audience through a collaboration between Nike and Apple. This wearable is shoe with a embedded tracker as fitness tracking kit. It shows time, distance, pace and the calories burnt during workout sessions or walking on the screen. It was one of those trendsetters for fitness wearables that we see today.

The wearable technology introduced as Fitbit Classic became the next big thing among the masses. It is among the present day wearables that every other person is seen adorning. They are stylish and very useful devices to track your health activities and features like your daily track of thing, distance traveled, calories burned and sleep etc.

Tommy Hilfiger brought the wearable clothing with much pomp in 2014. The jacket was integrated with embedded solar panels, so it can charge itself while on the go. Following the trend, many others inventions have been made in the field of wearable clothing.

Now, we have SmartHomes, Google Cardboad and Oculus Rift where wearables industry is also blooming with so many innovations in the market at affordable prices. Apple Watch, Google Glass and many more are taking the wearables industry to new heights.

We are heading to a more technology oriented world tomorrow where virtual world will be the part of our reality. Bringing it to focus, the businesses worldwide are preparing for this era by app development for such wearables. Mobile App Development is going to be a part of these wearables and thus it is important for businesses to realize the importance of applications for smart devices and wearables. Hope you got a good peek about the wearables evolution. Write to us if you know of any such innovations. We would love to hear from you.

Looking for a software development experts or any kind of IT solution, we are here with the knowledge and the expertise at your disposal. Talk to us now: http://www.heliossolutions.in/contact-us

Pre- Requisites of Mobile App Moving to a Cloud Platform