HomeCMSInvest your Time Learning these Framework & Languages in 2016

Year 2015 witnessed the most popular releases in the technology and software that has enabled developers to excel in their work and has also eased the process of development. We also saw many new innovations through technology where the world is looking at a very bright future, flourishing businesses with the little effort and living life will be made easy through technological innovations. 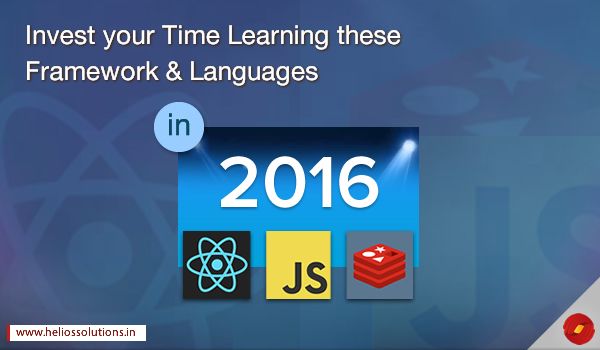 With the new updates in the most popular languages, here we have listed a few frameworks that developers should consider learning in the coming year –

Python, living to its name, it is turning out to be the most largely used scripting language in the year 2015. It is finally becoming very popular among developers and IT experts recommend using this language over the older version. With its release Python 3.5, it brought some really interesting features. It allows a node.js like event loop and type hints which is called Asyncio. The new updated also offers Async function, type hinting and matrix multiplication operator. There are other improvements in the libraries, security, an improved zip application support and new installer for Windows.

Fact: It ranks fifth among the most popular programming language – as mentioned in Tiobe Index.

With PHP upgrade, what coders can expect is a better experience with PHP scripting language. The upgrade is more or less about what can break your code and what is that you have to do next. It is certainly better backward compatible with your current coding. PHP 7 brings you new and improved features where after 20 years of its existence, it is finally enabled with internal Abstract Syntax Tree for static analysis. PHP has always been very consistent due to its uniform variable syntax that breaks everything naturally. Thus, you are availed with a faster and better development process. Have a word with a PHP specialist for more information.

JavaScript (/ˈdʒɑːvəˌskrɪpt/[5]) is a high-level, dynamic, untyped, and interpreted programming language. It has been standardized in the ECMAScript language specification.

It is one of the most used scripting language used today backed by a huge community of developers. JavaScript brought the ES2015 language specification that has undoubtedly made a developers life better. If offers new constants, scoping, arrow functions, extended literals and much more. Check out the features here – http://es6-features.org/#Constants . We should be glad that most browser have adopted to quick releases schedules and the support for ES2015 is great and there is Babel.js which will help you bring your code to older browsers.

Under JavaScript, there are frameworks that will be useful for developers:

Node.js is well-known as the largest ecosystem of open source libraries worldwide. It highly event driven and uses a non-blocking model which makes it very efficient and extremely light weight. JavaScript is a programming language which is un-typed and dynamic. And Node.JS is a framework for JavaScript language. As for Front End Development, the scope of Node.js framework is increasing with valuable contributions from the developer community and technology giants. It has found a way to have server-side implementation which will reduce the complexity of using two different languages of both ends.

At the moment, several performance driven frameworks have extended the functionality of Node.js to a considerable extent. The constant updates from the community have resulted in building it with new features. Thus, in the future it is expected to take over as a development technology for Front End Development.

The most awaited framework by Apple finally released a new version Swift 2 in 2015 which has brought very interesting features for developers on the table. The update offers error handling, binding, protocol extensions, grab bag, renamed syntax, improvements in Objective C generics. This has made development for iOS and OS X extremely convenient. Swift is becoming one of the most used application for Apple device development. Talk to the iPhone development specialist at Helios Solutions.

This programming language is making noise in the IT world. When it comes to JavaScript, many developers prefer development with this language. The latest version – Go 1.5 accounts as very vital update with major architectural changes to the implementation. Known for its social security benefits, this language is good for network and web servers. It works for stand alone command- line apps and scripts. This language has certainly gone from being a curiosity to a promising source for a fast paced development projects.

This language is statically typed to compile to JavaScript developed by Microsoft. It is known to have extremely compatible integration with Visual Studio and open source Visual Studio Code editors. It is becoming the next language for developers as it is written with Angular 2. It offers advantages in typing benefits large teams and large code bases. Consult the ASP.NET Specialist for development with TypeScript.

Few languages that you can try learning:

Moving from Back End to Front End Development

The technology world is slowly moving form back end development to front end development where the business logic is demanding it. The back end is being delegated to simple APIs and UX/UI becoming the part of Front End Development.

In the year 2015, we saw many browsers adapting very quickly to the new updates of various languages and frameworks. 2015 saw a release of the amazing Edge Web Browser. It is known as the successor of Internet Explorer which consists of an updated interface and faster performance. It adopts quick release schedule which Firefox and Chrome also follow. This is going to help movie JavaScript community to go ahead.

We are an IT outsourcing company India helping businesses make the most from their IT structure, we ideate, strategize and help your brand optimized through technological solutions. Be it mobile app development or development of intricate enterprise application, we do it all. All you have to do is post your query: https://www.heliossolutions.co/connect-with-us/ and we analyze your requirements to provide you with the best of solutions. May this new year bring prosperity in your business, wishes from Helios Solutions.

Looking for an Efficient CMS in 2018? Here’s what to Resolve!

Thinking of developing a website in 2016? Don’t miss out these web & graphic trends!