The iOS 9 release had many eyes on it. Apple technology users and fanatics all over the world were eagerly awaiting the launch, since the beta version looked so interesting. Also, since the iOS 8 brought many disappointments, everyone was waiting to see what iOS 9 has got. Rumors, release dates and compatible features pushed by developers had created enough buzz before the launch. We finally have it and it looks much promising than ever before. 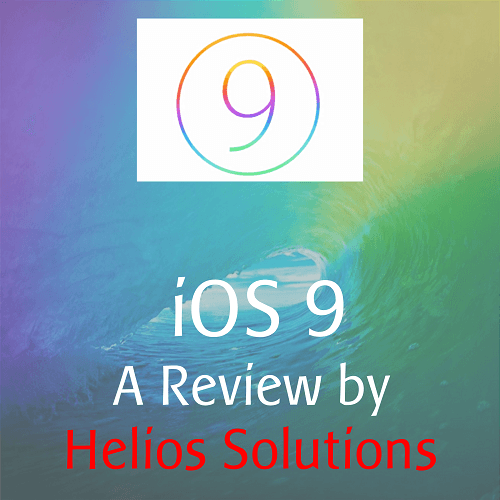 iPhone and iPad users learnt to survive with drained phones. We all know that it was already creating a negative impact among the users. This had to be amended. With the new update, apple has brought a feature that has learnt to save you battery instead of you learning to let it drain. iOS 9 comes with fewer slowdowns, hair-pulling plugs and battery issues. Ambient lighting and proximity sensors will help in saving your battery. After the not so successful update with iOS 8, it surely does make up to the success.

In these times of extreme work pressures and feeling constrained on time management, iPhone is not going to avail its users with features that will help you save time while doing tasks. It is offering brilliant technology that is exciting and time-saving where you enhance your productivity through features of multi-tasking, built-in applications and intelligent siri which is more proactive and suggests everything before you even know it.

Apple iOS9 comes with many enhancements. The more you get a hold over it, the more you will fall in love with it.

iOS 9 brings you very interesting update where even the functioning of your in-built apps have become more essential. Like mailing, browsing, notes, reminders etc. have become a better experience. You can add map, photos to your notes while using other applications too.

Certainly, those with iPad are going to get some extra-ordinary benefits. You will be more productive and faster. Key features like Slide Over allows opening two apps at once and slide one when you are done, Split View and Picture –in – Picture will help you get a command over multi-tasking. Now, men have a good chance to say, “The hell we can multi-task”.  But the best is yet to come, THE QUICKTYPE Feature. This feature will help you type, format, edit and select text faster than ever before on your iPad. It allows making short-cuts very easily with the short-cut bar. It’s like you have new iPad without really buying one.

With the update, looks like Siri is updated too. It now offers a wider range of topics with many options in the answers too. It is even sharper, attained accuracy and thus gives results faster. This update will give you answers and suggestions even before you question, it’s like reading your mind. Right from picture from your last summer trip or your son’s birthday party to reminders on the go, Siri will figure it out for you. Smart enough to make you function more productive than ever, making your life even convenient. Also, it will take the locations you are at, and showcase trending local news, so that you are updated and good to go.

With a longer battery life, you get a 1 hour of additional time before charging your iPhone where the proximity sensors helps in not turning on your device, infact it turns on a new low power mode that extends the life of the battery. Updates are smaller and thus convenient where you need not empty the phone to create space for the download. It will let you update through notifications. It is even more responsive with faster scrolling and smoother animation, in all a great user experience. Moreover, you have improved security that protects personal information, photos, documents etc through Apple ID secure.

This update has so much for the developers too. Developers API and services are given to developers to enable new categories of apps and features. You can create immersive games and enhance app functionality where you get expanded search capabilities and support systems like HomeKit and HealhtKit. Swift 2 brings enhancements to increase speed and performance of apps and thus more responsive. It is said that it will be soon be available as open source.

Is it worth to install Apple’s new update?

After praising so much, you must understand that all iOS 9 has is good news for its users. You might come across a few issues in installing if you are coming from an older device, but apart from that this is an amazing update in the technology and you must totally get a flavor of it.

What if my device does not support iOS 9 update?

Yes, there are many users globally who are so fond of Apple technology but not all of us can afford a new device every time. There are many who are still enjoying iOS features with older devices, in that case iOS 8.4.1 shall work for you. If your device does not support the new update, then you should prepare to get familiar with iOS 8. If you aren’t familiar with the process, click here: http://www.gottabemobile.com/2015/08/13/how-to-downgrade-to-ios-8-4-from-ios-8-4-1/. This could come handy if you don’t like the new update.

Is this a free update? How does it work?

Yes, it’s a free update, runs on any Apple iPhone or iPad. Even older versions can install the app. It’s fast and works well on iPhone 6 Plus and iPad Air 2.

All in all, this is the best update so far. Although clarifications on the Notifications bit still appears unclear. There are only alerts activated on push notifications and not a message which affects the signal, in turn forcing you to changes settings time and again.

We are not expecting a game change altogether. But the update has brought much to make our life simpler. We would say it did live up to the expectations after the iOS 8 release. Surely, iOS 9 has made its users happy.

Hope you have got all that you need to know about iOS 9 after its release. For more information on its features, you can log on to: http://www.apple.com/in/ios/whats-new/ official apple website. If you wish to build apps for this update, get in touch with the application development speciation at Helios, simply log on to www.heliossolutions.co/

Make yourself more productive with this new version. Write to us for your opinions, queries and suggestions on this new update by Apple. We would like to know how the world feels about it. If nothing, if this blog proved useful, you can definitely hit a like or share it, we’d appreciate.

iOS 9 launch – Everything You Need to Know Before Launch