HomeTechnologiesBlockchainBlockchain Technology: A Driver and Solution to New Global Infrastructure

Have you ever wondered about the technology that underpins Digital currency like Bitcoin, Litecoin, Ethereum etc.?

Cryptocurrency has taken the world by storm while average leaders and investors are skeptical, big investors have taken the leap and put their money on it. If predictions are to be believed the day is not far when Bitcoin and its Blockchain technology will eventually force the financial organizations across the globe to reconsider, adapt and change their traditional roles and infrastructure. With Ethereum passing the 1 billion USD benchmark Blockchain technology has become a force to reckon as the first non-affiliated unicorn.

While several debates are spewing about the speed of Blockchain adoption, major changes are already in motion- that will soon reach all areas of tech, finance and society as Custom Blockchain Solutions.

Let’s help you expand your enterprise edge over competition

When Blockchain was invented in 2008 its sole function was to serve as a public transaction ledger of the cryptocurrency Bitcoin, however Blockchain as a service is much bigger than Bitcoin and has a far more holistic reach. The experts see that it can power our need for bit data and create a new digital  identity which not only resolves the present issues with cyber security but also challenge the monopoly of big tech giants like Google, Facebook that have somehow ended up controlling the destiny of our data and the overall internet.

Blockchain Technology is like the new kid on the block that each one of us wants to befriend but does not know how to, mainly because we are still not sure whether to believe in the phenomenon or not. Let’s start from the beginning to understand the complete concept of Blockchain computing.

Blockchain was developed by Satoshi Nakamoto, as the central nervous system of Bitcoin in 2008. According to Wikipedia,

“Blockchain is a cryptographically secured, time-stamped, public and distributed database of every Bitcoin transaction that has ever occurred on the network.”

Simply put, Blockchain is a diary that is impossible to forge! Having said that, it is essential and mandatory to function on fixed principles that form the backbone of the technology.

1st Principle: Information once shared cannot be forged or changed

It cannot be controlled by a single entity and has no single point of failure. Any attempt to tamper with the data won’t be approved by the rest of the network and will be ignored.

The technology creates an ecosystem where there is no third-party interference; it has successfully eliminated the meddling of a middleman. Trust is established through code and collaboration, rather than a central authority.
Let us now see how these principles are applied:

Imagine there are 10 people who have decided to make a separate currency and one person- John decided to keep a track of all the actions in a diary.

One person – Jack decided to steal some money and changed the entries in John’s absence.

John noticed the changed entries and decided to stop this , he devised a program called Hash that turned text into a series of numbers and letters, even a small change in the series or string creates a completely new Hash.

After each record he added a Hash. The new diary entries looked like this …

Jacks somehow got to the new diary entries and changed them again..

John noticed the new changes and decided to complicate the record of each transaction. He decided to insert a hash generated from the record + last hash to make each entry dependent on the previous one.

If Jack wanted to steal the money, he will have to change the Hash of all the previous entries, since Jack really wanted the money he spent a lot of time counting and changing all the Hashes.

John complicated the matter further by adding another element ‘Nonce’, he decided to add a number after each record, a Nonce should be such that each Hash ends with two zeros.

Now to forge the transaction records Jack will have to spend hours choosing a Nonce for each line.

John then decided that there were too many transactions and he couldn’t maintain such records forever. So, when he recorded 5000 transactions, he converted them to a 1 page spreadsheet, and spread this sheet to 5000 computers which were all over the world.

Each spreadsheet is called a Block and each computer is called a Node, even if Jack managed to change any one entry the original Hash will still be saved on other computers and thus the change will not be allowed. Spreadsheets like this are linked to each other, forming a chain.

The Blockchain updates itself every 10 minutes, it does this automatically and as soon as it is updated it can no longer be changed. All the computers on the network  are updated at the same time.

Thus, the 3 principles of Blockchain became the backbone of Bitcoin and the Blockchain we know today was born, as well as the world of other cryptocurrencies.

Blockchain is truly revolutionary and has the potential to revolutionize nearly every industry. As a driver for transparency across the digital information ecosystem, it is boosting awareness across sectors ranging from infrastructure to public policy. Small and mid-sized companies can use it as successfully as large companies. Blockchain based business are being launched all over the world, from transportation, logistics, messaging apps, banking, music and entertainment and so on. 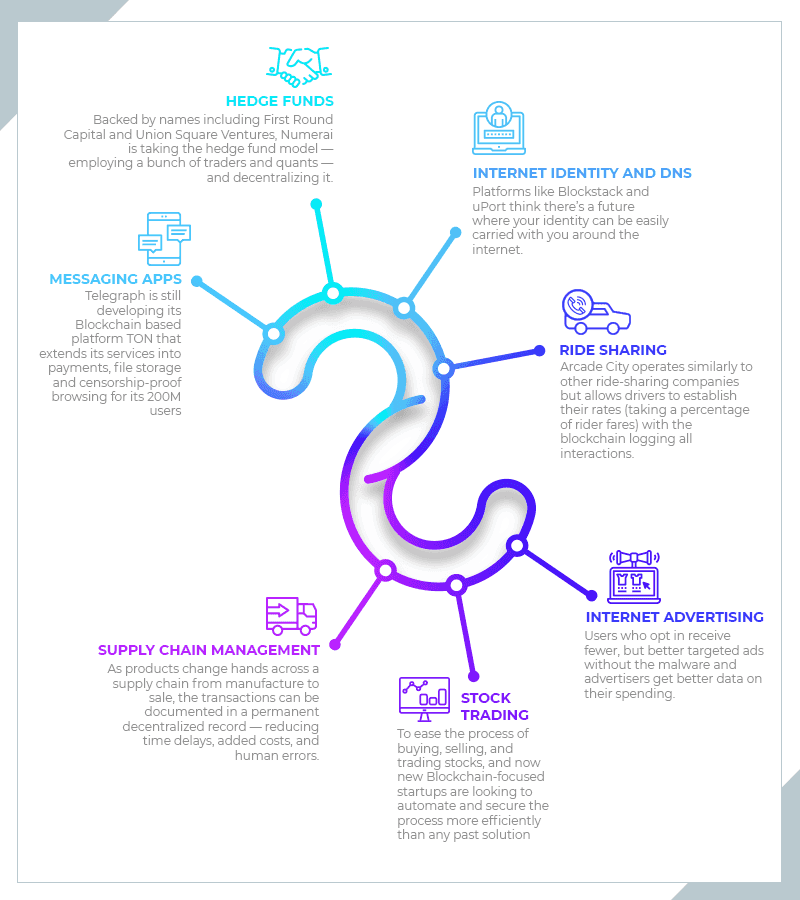 The impact of distributed ledger technology is far greater than what most of us visualize currently- we have just begun to scratch the surface of what’s truly possible.The first phase of digital revolution brought us the Internet of information. The second phase powered by Blockchain Technology – has brought the internet of value.

What opportunity do you see for Blockchain to disrupt and improve your industry?

DevOps and Cloud: The Synergy Driving Digital Transformation in Enterprises